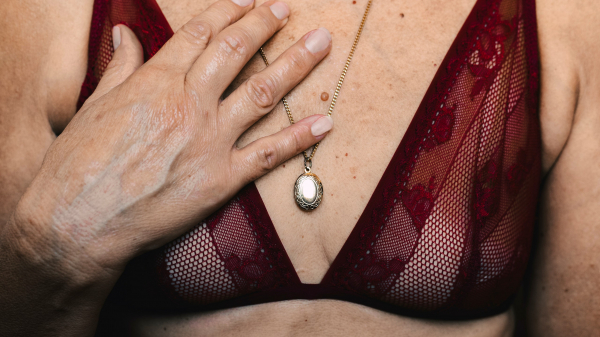 Once a former taboo gets a starring role in an advertisement, you know it's gone mainstream. Pubic, leg, and armpit hair all get fairly regular moments in the selling-you-something spotlight these days. The fact that removing it is a choice, not a requirement, for women and femmes is finally being widely accepted in most circles. But one set of follicles remains largely undiscussed: the ones from which your nipple hair grows. Nipple hair is one of the last beauty taboos, and it’s time we eradicated the shame associated with it.

Personally, I've always felt ashamed of my nipple hair, as I've never really seen any media portrayals or public discussions about it. (Partially due, no doubt, to the bizarre censorship of "female" nipples in general.) The thing is, nipple hair is completely normal in people of all genders and yet it remains taboo, particularly for women's bodies. "Many women develop thick, dark hairs around the nipple, and it does not mean there is any underlying medical issue," says dermatologist Joshua Zeichner. "Nipple hair is not commonly talked about and does not seem to be widely accepted as normal."

"Hair on the areola is completely normal! We are mammals; by definition mammals have hair!" says Mona Gohara, associate clinical professor in the department of dermatology at Yale School of Medicine. Gohara estimates that about a third of us have particularly noticeable hair in our nipple area. "Like scalp, underarm, pubic, leg and all other body hair, there are genetic differences in texture, amount, and visibility."

Dermatologist Elizabeth Bahar Houshmand adds that nipple hair usually isn't on the actual nipple at all. "Instead, this hair often pops up on the pigmented circles surrounding your nipples called the areola, and other non-nipple breast skin," she explains. According to her, it is extremely common for women to have hair around the nipples though the exact percentage of how many women have breast hair isn't known since this isn't something that has been studied at large or that women usually report to their doctors.

Why is nipple hair still taboo?

We don't bat an eyelash when our fellow male mammals have visible chest hair, says Gohara, so why do we get all freaked out when females do? You probably guessed it: This is because it falls under the same unrealistic, idealistic, body expectations that are often unfairly bestowed on women. "It's the same reason why a lot of leg or armpit hair is still taboo — it's not aligned with an arbitrary societal 'norm' that needs to be ditched!" says Gohara.

We’ve been trying to "free the nipple" for generations, says Alicia Sinclair Rosen, sex educator and founder of b-Vibe and Le Wand. "Heck, you can't even show a woman's nipple (even while breastfeeding) in public or social media," she says, referring to the fact that even though breastfeeding photos are technically allowed on some platforms, they're often reported by other users, which puts them at risk of being taken down along with other pictures of people with breasts in various states of undress. "Once we add something considered masculine, such as body hair, into the mix, a taboo is born," she says. "[If] a feminine nipple with a 'masculine' trait isn't portrayed in media, it creates mystery and can be considered erotic."

So it's no surprise that the hyper-sexualization of this body part makes it super taboo in general. Plus, unlike underarm or leg hair, this type of body hair isn't something you're likely to encounter on any old business day of the week, so you simply may not have a large sample size of other people's "normals" to compare your own to.

How can we normalize nipple hair?

"Science is always the answer," says Gohara. "Recognize that it is biologically normal." If we talked more openly about our own nipple hair within our personal circles to the extent that we felt comfortable, we would all realize it's something most of us have.

Bahar Houshmand agrees discussing nipple hair is key to understanding that having hair around your nipples is super normal and not something you need to stress about or get rid of if it's not bothering you. "If it does bother you or seems like a sign something's up with your health, talk to your doctor to discuss ways you can remove it," she says.

"Talking openly about nipple hair, showcasing nipples with hair in sensual or sexy photography, and not making it the butt of a joke can help normalize what is actually quite normal," says Sinclair Rosen. "Many of the current discussions around nipple hair are positioned as something to be ashamed of or it’s a weird body characteristic that equates to a woman being less feminine or sexy. When in reality, it’s just body hair."

And if you're still not into it, how can you remove nipple hair?

Even though it's widely accepted that humans naturally have leg hair, regardless of gender, some people still choose to remove it — and that's just fine. In the same way, having open conversations about nipple hair might still lead some to the conclusion that they want to get rid of it.

The skin around the nipple can be extra sensitive, so Gohara recommends that any hair removal methods be done with extreme caution to avoid irritation. "For shaving use a one or two-blade razor, go with not against the grain of the hair, and use shaving cream," she advises. "For depilatories, choose a small area to test out the product before using it all over to make sure the skin can tolerate it."

Bahar Houshmand personally does not recommend waxing or shaving since this skin is very thin and delicate, and believes tweezing is a better option. If the hair is dark, you could be a good candidate for laser hair removal, which is a great permanent option. Though you want to be careful if you have dark skin. "Make sure you are seeing a board certified dermatologist with laser expertise," she notes, something Gohara also recommends, noting that you should make sure the dermatologist has experience working with your skin tone. Laser hair removal runs the risk of hyperpigmentation or other side effects, so you want to make sure you see someone who is an expert.

The choice to remove (or keep) any body hair is a personal one, but at least know that if you have any around your nipples, you are certainly not alone.